I’ve done a lot of disgusting, undesirable things since becoming a mom.

For example, at various times and for various reasons I’ve caught both of my kid’s pee, poop, and vomit with my bare hands.  This was usually in an attempt to redirect the flow or minimize the splash zone.

I’ve sniffed butts, armpits, underwear, diapers, and feet to determine the source of offensive odors.  You know you’re a parent when you have no qualms, whatsoever, about picking up your small child and smelling their ass in public to determine if he or she has a poopy diaper.

When Bryn was three years old, she crawled into bed with me, woke me up and told me she had an upset stomach.  I laid her down with me and began to rub her tummy while questioning her about her symptoms.  Before I knew what was coming, she sat up and threw up all over both of us in the middle of my bed.  It was everywhere.  She was hysterical and we were both covered in vomit. 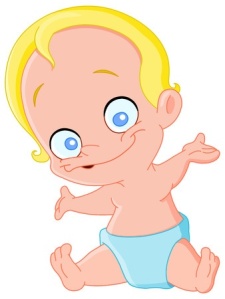 What? It’s just a little pee!

When my son was an infant he shot a stream of his pee into my open mouth when I was changing his diaper.  With baby boys you can never let your guard down while changing diapers. You have to be focused and quick to avoid disaster.  He was laying on his back on the changing table and I was talking to my husband.  His timing was perfect.  I was distracted while doing two things at once, and his pee shot straight up into my face as I turned my head and opened my mouth to talk.  Believe me when I say that was a startling, gag-worthy experience, and one I hope never to repeat, ever.

Another time while at Disneyland with the kids, I was holding Bryce on my hip while waiting in line to meet Mickey Mouse.  He was two and not yet potty trained.  He peed and pooped in his pull-up at the same time, and the two substances mixed to form a watery concoction that leaked all over my clothes from my waist down to my thighs.  I had extra clothes for him and was able to buy a new shirt for myself at the gift shop, but was at a loss to replace my jeans.  I smelled like I had the Hershey squirts for the rest of the day, and I wasn’t the only one who noticed.

When my daughter was five we were in the bathroom at Midway Airport in Chicago, Illinois.  Midway is a pretty nice airport, and their bathrooms are actually nicer than most, but when you have hundreds of people moving through them everyday they just can’t be that clean.  Well, after using the facilities, my daughter accidentally dropped

her favorite stuffed animal, a little orange cat named Spooky, into the airport bathroom toilet.  We both froze. And then, without thinking,  I did what any self-respecting, child loving woman with a Mom Card would do…I reached my hand into that Godforsaken pee-germ bowl of bacteria and I saved Spooky.  I rinsed him in the sink of the bathroom, wrapped him in a roll of paper towels, and then asked the cleaning woman in the restroom to pour straight bleach on my hands.  When we arrived at our hotel, I soaked Spooky in hot water and shampoo (it was the only soap I had).  Bryn was sad that I wouldn’t allow her to snuggle Spooky after his traumatic nearly-flushed down the toilet ordeal, but she understood that he needed to be thoroughly decontaminated first.  After arriving home at the end of our vacation, I put Spooky through a hot water cycle in the washing machine and high heat dryer before he found his way back into Bryn’s arms.

What I find noteworthy about these foul experiences with my children is how becoming a parent changes your reaction to them. Instead of becoming physically ill myself after being thrown up on, or grossed out by the ordeal, my first thought is of my child’s comfort, fear and how to make it better for them.  Instinctually, my own needs become secondary to theirs.  I will walk around Disneyland with my son’s poop on my jeans, and not make a federal case of it so he doesn’t feel shame.  I will bathe and wash my 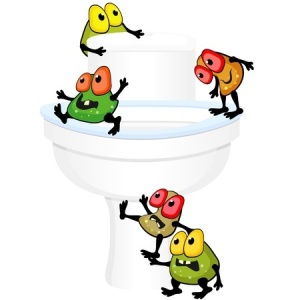 daughter’s hair before I wash her vomit out of my own hair so she will know her health and comfort are more important to me than a little (a lot) of throw up.  I will stick my hand in a disgusting airport bathroom toilet to save a beloved stuffed animal before I will allow my daughter to suffer that loss.

I have earned my Mom Card, and God only knows what their pre-teen and teen years will require of me.

Now I would love to know…What is the most disgusting thing you’ve ever done for your kids?  🙂

16 thoughts on “Wanda Says…I’ve touched poop with my bare hands.”