That moment, when you reach across the bed and feel his forehead, praying that the heat has left his little body in peace…

Bryce has been sick with a nasty virus for the past week.  We’ve battled six days of high fever and other bodily functions I’m sure you’d rather I not go into detail about.  Well, that’s too damn bad cause I’m totally going into detail about it.  The kid has had diarrhea like an arterial spray.  I’ll let that visual sink in for a moment.  You’re welcome.

My kids are both very healthy.  They only get sick once or twice a year, but when they do get sick, it’s serious.  It’s a knock you on your ass for a week kind of sick.  Their bodies hold onto infection like a fucking grudge.  It’s horrible and scary.   When you’re holding your child while their body feels like it’s on fire with heat, you can’t help but be terrified for them.  They get that glazed look in their eyes, and when they talk, half the time it’s delirious gibberish.

I took Bryce to the doctor on day five of the fever and she told me it was a virus going around that was lasting 7-10 days.  She said his fever shouldn’t last for more than five days.  I explained to her that we were already at day five, as Bryce lay in my arms burning up at 103 degrees.  She reprimanded me for allowing him to have dairy products.  I explained that I was giving him whatever he wanted to eat because he had no interest in food and had already lost two pounds in five days.  She scowled at me.  I scowled back.  She is not my regular pediatrician.  (She was correct though.  I shouldn’t have allowed him to eat yogurt and milk.)  Then Bryce had a meltdown in the office when the nurse tried to give him a dose of Tylenol.  With tears in his eyes and a hot pink flush to his face he explained that their Tylenol was different than our Tylenol, and he preferred to wait until we got home and take our Tylenol.  He said their Tylenol was yucky because it wasn’t the right color.  I eventually got him to take it, but with the last sip he gagged and then regurgitated a large portion of the dose back at me.  I carried him to the car, both of us splattered with Tylenol vomit.  Good times. 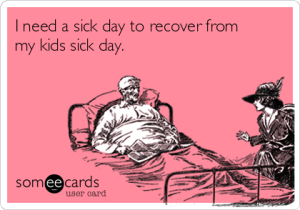 For six days I monitored his temp, coaxed him to take medicine to reduce his fever and slept with him so I could feel his body and watch his breathing.  I held cold packs to his back, forehead, stomach and legs.  He would look at me with glassy eyes and say, “Am I still your little fireball, mommy?”  It was the kind of fever that could have killed your child before the days of modern medicine.  Thank God for modern medicine.

Finally, this morning, as I reached for Bryce’s forehead next to me on the pillow, I felt it.  That cool, dewy ring of sweat around his head on the pillow.  The gross, disgusting, beautiful ring of sweat that indicates his fever has broken.  His little body was so quiet and deep in sleep, which was a blissful change from the constant moaning, rocking and shivering from the past six days.

I’m exhausted.  I’m relieved.  I can’t wait to get the hell out of this house.  I need to drink wine on the beach and watch the sunset with my beautiful kids and my husband.  I need to take him to the park and watch him run, and climb, and laugh, and play.  I need to see him smile with excitement, health, and joy.  That’s all I need.  🙂